Guerilla Marketing: The Power of the Flash Mob

The answer: guerilla marketing. Independent filmmakers have to compensate for their lack of a large marketing budget with creativity. The internet in particular has made it possible for independent filmmakers to get their film noticed. One cost-effective way to do this is by organizing a flash mob event.

A flash mob is when a large group of people assemble suddenly in a public area, simultaneously do something unusual, and then leave. The flash mob began as more of a social experiment or form of performance art than a vehicle for marketing, but it was quickly hijacked by large corporations when they recognized its popularity. Companies like T-Mobile and Coca-Cola have organized flash mob events, but the nature of a flash mob makes it an ideal tool for a small group that needs to promote something on a budget.

How to organize a flash mob:

Step 1: Have an Idea

A successful flash mob needs to have a unique idea behind it. The comedy group Improv Everywhere stages performances similar to flash mobs, such as freezing 200 people in place for 5 minutes in Grand Central Station, or holding no-pants subway rides. They have also done things with smaller groups of people, like creating a time-loop in a Starbucks. If you’re looking for some inspiration, check out their YouTube channel. While a flash mob is technically a large group, you can still make a scene and promote your film with just a small group of people as well.

If you want to promote your film through the flash mob, you should organize something that relates to your film in some way. For example, if your film is a horror zombie flick, have a bunch of zombies show up. Or if your film is a musical, you could use a smaller group and stage an impromptu musical number in a public place, perhaps using one of the songs from your film. The possibilities are endless.

Some things to keep in mind: if you want people to show up, make sure that when you do hold the flash mob that the participants won’t be breaking any laws. People come to these to be spontaneous and have a little fun, not to get arrested. So pick a public location where its legal for your group to gather, and don’t do anything that threatens or endangers bystanders. 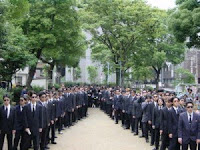 Step 2: Get the Word Out

If you want people to show up at your flash mob, people need to know about it. In this, the internet is your most valuable tool. Create an account for your event on social networking sites like Twitter and Facebook—and make sure you are active on the site too, respond to questions and provide frequent updates on the event. You can create a website for your film, where you can provide detailed information on the event, and use Twitter and Facebook to get people to visit the site. Post in forums and chatrooms, send out mass emails, and tell people to forward the information on to people they know. In short, do everything you can think of to let people know what you are doing. 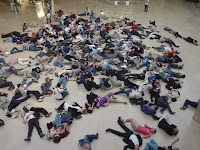 In order for your flash mob event to go smoothly, participants need to know exactly what is happening, where, when, and what they are supposed to do. There are several different ways for you to organize and synchronize the event.