By: Lindsey Curran
So you know the basics of cinematography, but you’re having a hard time thinking of ways to give your shot a little more stylistic punch. What can you do?Well, next time you’re watching a favorite film, start thinking about the different camera angles you’re seeing. Unlike your eyes, a camera isn’t fixed in a certain position at a certain height off the ground. Developments in technology have made it possible for a camera to go just about anywhere. Here are just a few ways to start getting a little more adventurous with your cinematography.

Get up on a ladder; shoot out a window, from a helicopter, anything. A birds-eye view allows a perspective that is completely new and different from what we are used to seeing. High angles can also be used to make the subject of a shot look smaller and more diminutive, enabling you to influence how the viewer perceives the subject.
2. Low Angles 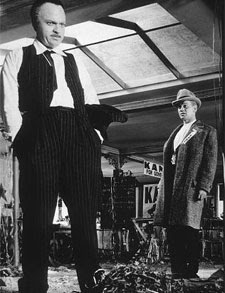 Who says your horizon has to be perfectly level? Directors like Terry Gilliam and Tim Burton use canted angles frequently in their films, and even the 2008 Oscar winner Slumdog Millionaire makes extensive use of canted angle shots. Canted angles, in addition to being visually striking, can also emphasize a sense of disorientation or alienation in the subject of the shot.
The Complete Tricks
Posted by WOLFTICKETS