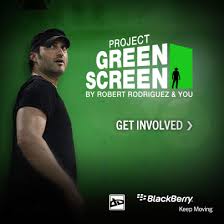 The British film types, Shooting People and Little White Lies have been touting Robert Rodriguez's Project Green Screen as "This is an ultimate collaboration opportunity that gives YOU the chance to star, cameo or design elements of the finished film, from March 18th – April 17th"

I can't see any benefit to a filmmaker in getting involved in this competition, other than the self gratification of star fucking. Having run a great number of competitions myself here at Raindance (our first was with Nokia Shorts in 2003) I had to learn how to provide benefit to competition entries.

Unlike Rodriguez's competition, we never insisted that we, the competition organisers got 100% of the intellectual rights to the submissions. Never mind that the design of the Blackberry competition is meaningless, to ask for 100% ownership of the submissions is ego mania gone way too far.

Lesson learned: read the T's & C's before you submit.

I'd love to know your opinion on this: Email me.