Yesterday passed in a blur and the trip to the Cote D'Azur which seemed so impossibly long a few days ago has passed by at lightning speed. Only 2 more mornings and I am gone!

At 11am I took a bunch of Raindance members on a tour of the market and showed them a few secret places to get freebies and those elusive party tickets. I doorstepped Gary Phillips of Moviehouse Entertainment who gave an impromptu 10 minute masterclass on the relationships between producers, sales agents and distributors. A poster for a film he is representing was just singled out by Hollywood Reporter as a terrific example of a poster. All this while trying to finish a press release. Thanks you Gary and partner Mark Vennis.

We ended up as usual at my private stomping ground - the Media Pavilion - stand number 120 this year.

The Media Pavilion is really one of Cannes' best kept secrets - for the price of a Market badge - you essentially get an office - with WiFi, message taking and more importantly - meeting areas with free drinks for your guests. At the American or British pavilions, in contrast, the drinks are sold at normal prices, meaning that meetings are suddenly an expensive affair. And the staff at the Media Pavilion are cheerful and helpful.

Today I mainly toured the stands and spoke to some of the professional sales agents in the Marche. Meetings are structured as such:

Raindance's Director of Programming, Suzanne Ballantyne sets up meetings weeks in advance from London. On arrival you look up the company's Cannes headquarters in the  Marche guide and turn up at the meeting. The sales rep then goes through teh films one at a time, showing you the one-sheet, discussing the merits of the film and often showing a trailer. If the film looks suitable for Raindance, then one gets either an invite to the market or festival screening, or is given a DVD screener. Because of Raindance's excellent reputation and long history of launching films into Europe, we also report on the progress of previously screened films.

I bumped into so many good friends - Rinaldo - the energetic and passionate publisher of Moviescope Magazine being one. We swapped tales and yarns for a few minutes. Rinaldo and I have known each other since the start of Raindance - a really long time now - and we watch each others backs. Amazing to hear today how jealous and angry competitors and ex-colleagues are still trying to stick the knife into either Moviescope or Raindance. Geez!

I also ran into and had a brief catchup with LA based Shoreline Entertainment's Morris Ruskin - another of my favorite people.

Suddenly the Marche was closing and with nothing to eat since the morning with a couple of hasty croissants (courtesy of the Media Pavilion) I had to strategise on how best to max out the evening. Elisar Cabrara, our very first Raindance employee and now part of the Highpoint Media Group came charging to the rescue and led us down the Croisette - actually a very short way down the Croisette where we ducked in to Dutch drinks and snafued a couple canapes and then to the Swarovski party in honor of Romeo and Juliet. OMG what a party!

I managed to catch up with former Raindance student Lord Julian Fellowes and BIFA sponsor Nadia Swarovski as well as tons of London friends I hadnt seen in ages, included Hamish MacAlpine who whispered a few secrets about his exciting future plans. I didnt realise that he re-edited The Proposition. Mums The Word on his amazing future plans.

By now it was 9pm, and Elisar trooped us to a secret cheap pizza joint where we ended sitting next to a Dutch DVD distributor.  We left to the Tokyo International Film Festival party in the glamorous Majestic Hotel Ballroom and finished up about midnight.

Cannes really is such hard work.
;-)

And the weather continues to suck, so be happy in your home. 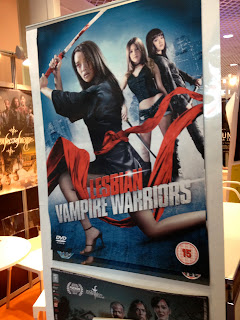